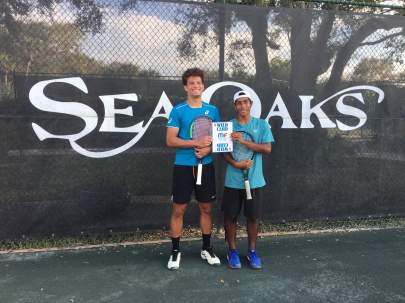 It marked the second straight year that Segura won this specially-created tournament where the winner is awarded a main draw wild card entry into the Mardy Fish Children’s Foundation Tennis Championships, Vero Beach’s $25,000 ITF World Tennis Tour professional tennis tournament that has been held since 1995. Segura will be among 32 players from around the world who will compete in the main draw of the event April 29 – May 5 at The Boulevard tennis club. Last year, Segura defeated Jack Vance of Henderson, Nevada 6-3, 6-4 in the championship match at Sea Oaks to earn a wild card into the 2018 event, where he lost in the first round to Nico Mejia of Colombia. One of the top junior players in the nation, Segura plays ambidextrously, hitting right-handed and left-handed and also using two-handed forehands and backhands just as his great uncle Pancho did during his Hall of Fame career.

En route to the title at Sea Oaks, Segura beat 39-year-old Brian Battistone in the round of 16 in what is believed to be the first ever pro tennis match played between two ambidextrous players. In the semifinals, he beat Jack Vance by the exact 6-3, 6-4 scoreline from their 2018 Sea Oaks final. In his two tournament appearances at Sea Oaks, Segura has won all nine matches in straight sets.

The full completed draw and schedule can be seen on TennisLink here:
https://tennislink.usta.com/Tournaments/TournamentHome/Tournament.aspx?T=235635#&&s=7Draws3 Thirty-two players from 11 states and three different countries were represented in the event. The event featured daily crowds of several hundred fans.

The Mardy Fish Children's Foundation will also host a qualifying wild card tournament – or a pre-qualifying event – and a main draw doubles wild card event at The Boulevard Tennis Club April 24-27. To enter and for more information, go here on the UTR website: https://www.myutr.com/events/3744 Entries for these events are open to anyone, but players must have an ITF Ipin number in order to play in the official qualifying or main draw events, if they win these two tournaments.

Tournament tickets and sponsorships for the Mardy Fish Children's Foundation Tennis Championships are now on sale and can be purchased at www.MardyFishChildrensFoundation.org Daily tickets cost $20 with daily “night” tickets purchased after 5 pm cost $10. Season tickets for all sessions cost $100. Admission for children 18 and under is free. Fans can follow news and developments on the tournament on Facebook and on Twitter at @VeroFutures. Detailed sponsorship information can be obtained by emailing Tom Fish at Ttfish10s@aol.com or Randy Walker at RWalker@NewChapterMedia.com

Founded in 2007, the Mardy Fish Children’s Foundation (www.MardyFishFoundation.com and @MardyFishFound on Twitter) currently supports over 2,100 children in 15 elementary schools and six middle schools in Indian River County, Florida by providing after-school exercise, nutritional and enrichment programs in a safe environment to prepare them for healthy, productive and successful lives. The Foundation introduced the “Six Healthy Habits” in 2012 which are Get Sleep; Drink Water; Exercise Daily, Eat Healthy; Brush and Floss; Make Friends.