Chase Perez-Blanco of Quail Valley, the winner of Vero Beach’s “King of the Hill” competition, and Slim Hamza of The Moorings Club, the “King of the Hill” runner-up, have officially been awarded a main draw doubles wild card into the 2022 Mardy Fish Children’s Foundation Tennis Championships, the $15,000 ITF World Tennis Tour USTA Pro Circuit event to be played April 25 – May 1 at The Boulevard. 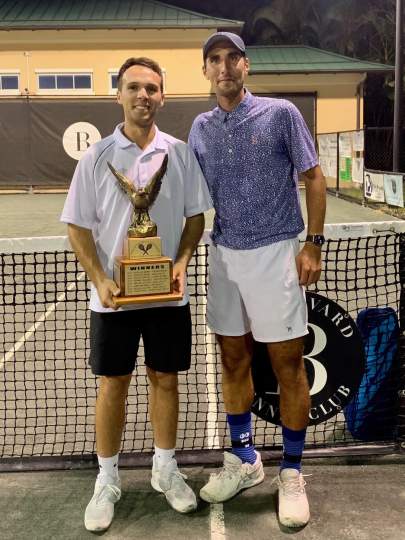 Perez-Blanco and Hamza will play their opening round doubles match against ATP-ranked professionals as the feature night match on Tuesday, April 26.

“We are so happy to award a main draw doubles wild card to the ‘King of the Hill’ winner and runner-up, which has become a nice local Vero Beach tradition,” said Tom Fish, co-tournament director of the Mardy Fish Children’s Foundation Tennis Championships. “Chase has been a key figure in the Vero Beach tennis scene the last few years and Slim had been an exciting new addition to our community. Both played high-level and entertaining tennis at ‘King of the Hill’ and we are looking forward to seeing them compete against ranked professionals starting on Tuesday night at our official pro tour event.”

In 2019, Perez-Blanco and “King of the Hill” runner-up Andrew Butz came within two points of winning a first-round doubles match against ATP ranked players, losing to Andrew Watson of Great Britain and Paul Oosterbaan of Michigan 6-2, 4-6 (10-8)

Hamza has competed against such players as Jamie Murray and Ernests Gulbis and reached the doubles final at a $15,000 event in Tunisia in 2014.

For information on Mardy Fish Children’s Foundation tickets, including reserved seating, sponsorship seating and general admission, go to www.MardyFishChildrensFoundation.org or email Lynn Southerly at LSouth1072@gmail.com Daily tickets will be available for $40 ($30 paid in advance online). Season tickets will be $200 and reserved and sponsorship seating and packages are also available.